Little Leah and a song

Our baby girl is four months old! After we returned from Pennsylvania during Christmas break, Leah decided it was time to roll over from her back to her tummy. She loves to use her strong little legs to stand up while someone is holding her. All our babies have been very happy, but Leah seems to be the happiest of them all! She smiles and giggles at her sisters and brother when they talk to her and say her name.  Leah is sleeping all night long from 8 pm to 8 am. She is even content to lay for a minute in the morning before I feed her while I make myself a cup of coffee.  She is drooling all the time and usually has a finger or two or three in her mouth. We couldn’t be happier to have this sweet bundle of joy in our lives.

Also the girls sang with Micah at church…

I say this all the time, but time flies with little babies. It just goes way too fast. Our baby is six months old!

This last picture makes me laugh, with that face that he’s making. It’s really not how he acts at all, but he was starting not to feel very good that day and I happen to capture it. But he was mostly happy as you can see.

The next picture he looks like a cute little old man.

This last month, he really has gotten good at rolling every which way. He rolls over on his belly, then over on his back again, over and over. I really need to be careful now where to put him, so he does’t fall. Which actually did happen once already. Violet is a big help when I need her to lay Keith down on his play mat for me. Well, one time I asked her to lay him down, and I don’t think I told her the floor. She brought him in the living room and laid him on the couch and then went somewhere. Not long after that I heard Keith crying really loud. I came in the room and he was laying on the floor. He had rolled off the couch. Poor kid, but after some soothing, he was fine. We just make sure he doesn’t get put down on the couch by himself anymore.

This is how he likes to sleep these days. On his belly and usually at the end of his bed. One time his head was crammed into the corner, but he was fine after I moved him around.

Just this month he got his two bottom teeth! 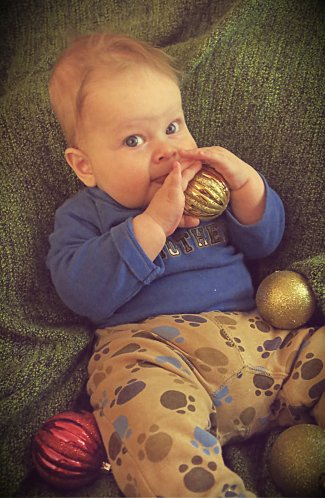 And I just starting feeding him solids. His first taste was pumpkin (from a baby food jar, I wish I could buy it fresh), and he did not like it. He’s also had some rice cereal and that’s about it so far. He seems like he wants to eat, but does not like what I give him. Don’t let the first picture fool you with his cute smile. He’s just showing off for the camera. 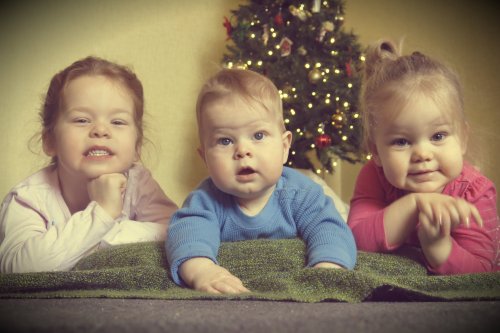 We’re so happy to have this little guy in our family. He makes us all happy with his cute smiles and happy attitude.

And I can’t get enough of his chubby little cheeks. 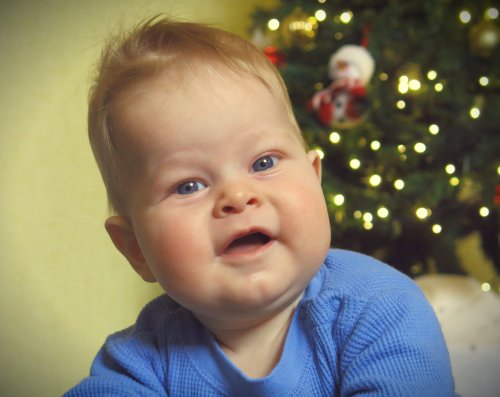 Our cute little man is five months old! He is starting to find more of a voice, when it’s getting close to his nap time and he’s getting tired, he will start squealing. Other than that he is still very happy. He is constantly sucking on his fingers, which is making them very dry. I’m just waiting for his two bottom teeth to pop out soon.

We had a surprise visit from the children’s doctor, who we visited about a month ago. She just showed up and was here to check out Keith. Not exactly sure why she came and if she will keep doing it, this is something I need to find more information about, but I didn’t mind at all! 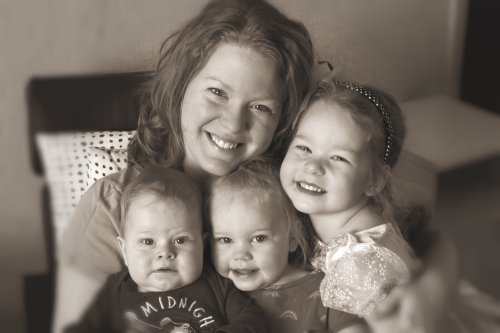