So I’ve heard about the cold weather a lot of people in the States are having, but I have to say that I don’t really feel much sympathy.  Last week, I thought -40 C (-40 F) was cold, but of course there is always colder.  Like yesterday. It was cold. Stinkin’ cold.

Lots of fog at this temperature, you can see a little below. 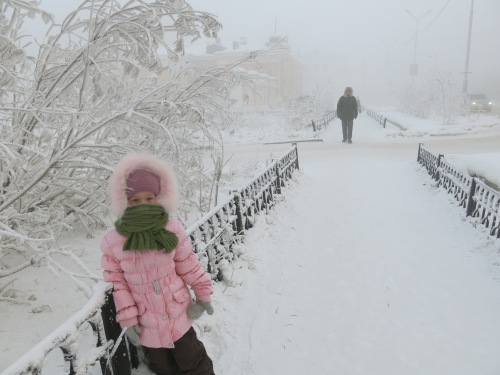 Violet and I on a short walk to the grocery store a little while ago when it was a few degrees higher.

My hands were out of my mittens just briefly to take the picture.

Right now, it is winter break for most people from work and school and that includes us from classes at the university.  In Russia, New Years is THE holiday. So from Jan 1-10 or so, most people have vacation. New Years Eve I got so sick with some awful bug, I was not going anywhere. I had already made food for that night, so Micah and the girls went over to our friends who live nearby. They ate lots of food, some new interesting things like cow tongue, cooked horse meat in different dishes, frozen thinly sliced raw horse meat, and baked thinly sliced horse intestines.  When I was finally up to eating two days later, I tried some leftovers Micah had brought home. The cow tongue wasn’t so bad, and I’ve had that other places, they served that to me in the hospital after I had Keith in Moscow. Cooked horse meat tastes good and similar to beef. But, the intestines, for me that was a bad idea. I took one bite and the only thing I can say to describe that taste was to have you think of a farm. Think of the way it smells.  That is exactly what it tasted like.  I’m not feeling great thinking about it. Ha! I just hope I don’t get that offered to me anytime soon. I’m not sure if my stomach will be able to handle it.

Micah and the girls came home after a couple of hours of being at our friends place, then at midnight we watched the pre-recorded bells toll at the Kremlin on TV. After that, people everywhere here were setting off lots and lots of fireworks.  Not just the little measly ones either, but pretty big ones. And when they go off right in front of your apartment windows, they are loud.  But the girls loved it.

So now with less than a week left in our “vacation”, we are enjoying some down time as a family and spending time with our newly made friends before we get busy again.

This entry was posted on January 7, 2014 by mkv09. It was filed under Siberia, Written by Katrina and was tagged with cold weather, cow tongue, horse meat, New Years.