A little while ago I was inspired by the super bowl to make some wings for supper, even though we didn’t watch it, wings sounded like a good idea. So like always, I found a recipe on allrecipes.com. Oh! I take that back! Micah found it for me on that site and I was the one who went to the store to buy the groceries. The recipe called for vinegar and he said we needed some at home, so I got some vinegar with the rest of the food we needed and headed home. After breading and frying the wings in butter (stay with me), you mix together a sauce that you pour over them while they bake. This is where the vinegar comes in. This is what I added:

After mixing up the sauce and putting them in the oven, after about 15 minutes I opened the door to check on them and the vinegar was so strong it burned my eyes and I could hardly breathe! Something was terribly wrong. I found the vinegar bottle that I had bought and this is what I found:

It reads: BE CAREFUL! Without dilution with water it is dangerous to life

Umm, yeah. I definitely bought the wrong bottle of vinegar. This one is 70%! And needs to be diluted in water. I think it said a half cup to about a liter of water!! 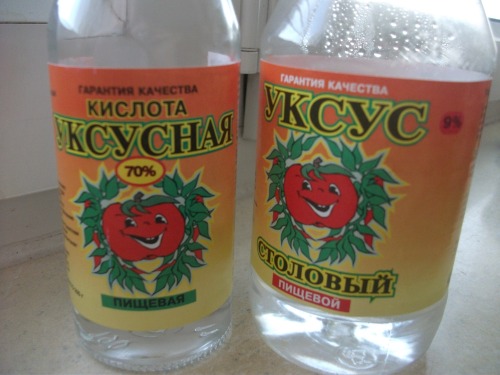 The dangerous bottle beside the regular one

Well, I tried to save the wings by dumping out the sauce and trying over. They were actually pretty good in the end. Next time I buy vinegar, I will definitely be looking closer at the label.

This entry was posted on March 3, 2012 by mkv09. It was filed under Moscow, Written by Katrina and was tagged with reading labels, vinegar, wings.